So, been almost a friggen month since I last updated this thing. Go figure dear Magaly would pull my attention back into focus here.
Work has been going good. We finished our in class training last Friday and today was our first day on the phones (call center). It went pretty well over-all. I'm not as nervous since I know I won't know anything and will stumble through a lot and forget a lot. I guess it's beneficial that I worked at a call center before so everything that made me nervous my first day at the last one doesn't make me nervous at this one. It's mainly just all the different things we do, and then all the things we are trained to do but can't yet or can't until certain circumstances...I'm working 9AM-5:30PM Monday to Friday for the next 3 weeks. It's technically still part of training, but on the phones now. My real shift will begin after that and will be a 1-2PM start with Tuesday&Wednesday off. I much prefer afternoons and having days off during the week will be nice since everything is open, etc.
The new living situation is awesome. The couple that own the house are just so insanely nice and great to have as roommates. They leave tomorrow morning for a little less than two weeks (coming back the 25th I believe) for their wedding and honeymoon and stuff. It'll be odd being home alone solid for that long other than the two tiny dogs and cat they have. I still have my three male ratties and now have a gecko and bearded dragon! The beardie was originally my roommate's. She had bought a breeding pair at hatchling age but now that they're becoming of age more they're beginning to fight, etc. more often if in the same tank so she separated them, but then felt bad not having enough time for two so we talked and the big male is now mine. We'll try breeding them at least once I think. The gecko was from a kijiji ad I had found before moving. He's a cranky older guy who was never really handled so I have to be very cautious with him right now.

Other than all that, life has just been busy, because of all that and then bus-ing around town on weekends to get shopping done, etc. eats up a lot of my free time. With this shift I can at least catch up on a lot of things I've been neglecting and won't have a ton of extra time for when I switch to my regular shift. A lot of it is over due art and cleaning, and of course a lot of Wiccan things I've had to let slide for too long. I did happily find another occult shop downtown though. I am upset I missed the Pagan Pride thing they apparently do every year in the park by a week though lol
Hubby and I are saving and going to find a nice house or duplex style house to rent. We have talked extensively and have pretty well come to the decision that we don't want to permanently live in Sarnia. The plan, as of right now, is to rent a nice place in/close to Sarnia and work and save while he finishes his Red Seal and then buy/build a house on the edge/close to Peterborough in the end. Not only is it a nice city but it's pretty much the middle point for visiting both side of the family (roughly 3hrs from my parent's and around 3.5-4hrs from his family), so is beneficial in that way as well. Jobs aren't super abundant, but they aren't really anywhere anymore. He has quite a few friends living there though and I do currently have one and one girl from our training class I've become close with moved here from there and still visits their family there all the time and wants to move back if they can. It's a pretty win-win situation if we can manage it.

Anywhoo, enough ramblings for now. I've got to get to bed soon for work in the morning...7:30AM is just waaaayy too bloody early for me. So, I promise to make my way around to visit everyone soon and hope you all have been doing wonderfully!
Posted by Lilac SilverFox at 11:05 PM 1 comment:

So, life has been insane lately. Not only started a new job but moved to a new place closer to work. I'm living with a soon to be married couple, who are both very nice. I also live closer to a friend from my training class at work that is also Wiccan, which is pretty nifty. I also saw some Wiccan books in the basement when I was putting some stuff down there but haven't asked cuz while they were right out in the open, I feel like I was snooping by asking or something LOL

I hope to get stuff sorted out again and get back to the personal things in my life.
Posted by Lilac SilverFox at 4:31 PM 1 comment:

Been slacking in a lot of things lately. Trying to keep myself busy and catch up on things before I start work on the 2nd (Yes, I finally got a job!! w00t!) so am trying to get back into some art things. I'm still insanely behind on my 52 Weeks art journal but will catch up on that another time. Right now I've been itching to draw and create. I don't have the right supplies to make some things I want to start working on, but am going to have fun with the stuff I can. This is one piece I'm working on and hoping to get up on my etsy shop when I get things rolling in there. 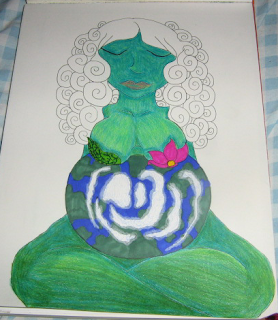 Well, I finally have the bigger bedroom and it's all organized. My only thoughts are on how to set up the table I'm going to use as my altar. It's small...Like probably 1.5ft across squared type a deal...and it has to be moved before using it, so no fancy set ups to stay at all times. I do have a large area set up on the one half of my dresser though that can stay permanently, so am thinking of just covering the table with this black fabric I found, then adding in smaller candles and things that won't fall over as easy, and bringing in items I may need as I get things ready.

How do you all deal with small altars and/or having to move them? I miss my big painted desk I use to have LOL
Posted by Lilac SilverFox at 7:32 PM 4 comments:

Technically I'm like 10 minutes late, but it's been a long and busy day unfortunately. I'm noticing rituals and things are always agreed upon but never actually carried out with my roommate...Kind of annoying, so I think once (if I do) move into the bigger bedroom, I'm just going to find something for an altar and do my own just without the incense because of the furballs.

Today I so wanted to do something big for my Faerie Friends...but unfortunately (although I am enjoying myself) I'm staying the weekend at my parent's so do't have anything much and what I do have for my tools and such is packed up...So, a little blog post to show my love for the Fae. 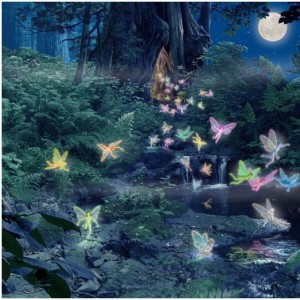 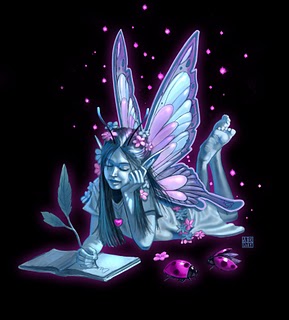 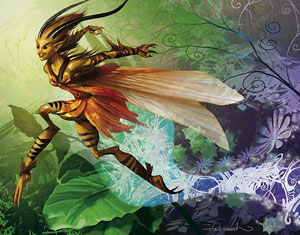 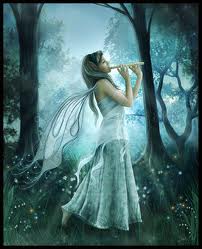 Kind of late, but I believe we're celebrating "tomorrow"/tonight anyway. This is one of my favourite holidays, along with Samhain, for it is the height of life and right beside my birthday on the 23rd, and Faerie Day on the 24th!
I hope you are all enjoying this Summer! I will be on more once things settle down some more and want to thank everyone who sent me well wishes to my last post. It means a lot to me and I will be journaling and returning to my Witch School meditation and other studies to help me feel more centered.
Posted by Lilac SilverFox at 2:04 AM 2 comments:

So, I've been extremely absent and hate that. I haven't done anything 'witchy' in weeks, barely even anything artsy in the magickal areas. I'm so far behind on my Pagan Art Journal pieces and with all this postal strike nonsense, I'm feeling horrible on making some people wait for pieces I've done as part of a group project.

I somehow remembered last minute that tonight was the full moon and jumped onto The Stone Circle just in time for their online ritual. It was needed. I need to start doing my Wicca Online courses again, especially the meditation practices now that I've quit smoking again (On day 5 now) and I miss the study. I don't know why it seems like I have no time for these things when I'm not working yet, and other than some house cleaning and playing with the rats, I really don't have any serious responsibilities at the moment...I should really try and work on catching up on the art journaling since all my supplies are here (although I need more white paint soon) and to start my Wicca Online course over....Sucks losing my grades and beginning again, but it's been too long for me to feel comfortable just jumping back in mid-lessons. I hope one day to be able to afford the full membership and access all the courses they offer. hmmmm I need to find my notebooks with some of the stuff I copied out too...

I feel out of touch with everything. In some ways I feel like I'm making progress and working towards things, but mostly I feel like a fumbling fool right now. I miss my hubby, I miss my kitties, I miss the quiet country air...I may have only lived there a little over a year, but it is my home....and I miss it a lot...Depression has been nipping at me, and I need to try and focus on other things to keep it at bay. I also need to try and start eating healthier and exercising again...This extra weight will just not do LOL I just feel lost lately....
Posted by Lilac SilverFox at 12:42 AM 4 comments:

Button, button, who's got the button?

Lilac SilverFox
25yrs old, Wiccan, Vegetarian, love to write and love my ratties! Have three blogs to follow each. Blessed Be 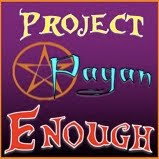 CURRENT MOON
about the moon

Visit PaganSpace.net The Social Network for the Occult Community